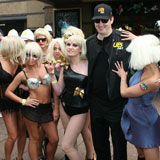 September 27, 2010 (London, UK) – London was in for a treat this past week when UB’s Phil Hellmuth, arguably one of the kings of the poker world, made his grand entrance to this year’s World Series of Poker Europe*(“WSOPE*”) at the Casino at the Empire, located in the bustling hub of Leicester Square. Eleven-time WSOP bracelet holder Phil Hellmuth was the focus of another eye-grabbing grand entrance to the Casino at the Empire, Leicester Square in London, accompanied by 11 Lady Gaga lookalikes, and a very British marching brass band.

“I was pumped to see such a huge crowd gathered at ‘the Empire’ like never before when I arrived to take my seat at the WSOPE. Quite the arrival I’d say. The London double-decker, the brass band and 11 Lady Gagas all add up to the most unique media event in poker so far, “ said the legendary UB pro Phil Hellmuth. “My crazy themed grand entrances to the WSOP in Vegas are an institution, and now London’s WSOPE seems to have embraced a whole new tradition too.”

The London press, the local paparazzi and a thousand-strong crowd were entertained ‘Las Vegas style’ in Leicester Square on Thursday afternoon, when UB Pro poker player Phil Hellmuth paraded out of a big red double-decker bus, and into the thick of the dancing, prancing posse of Lady Gaga lookalikes.

The hero Lady Gaga had taken prime position in front of ‘the Empire’, and was leading the other ten impersonators in a rocking rendition of the pop diva’s number one hit Poker Face, backed by a 23-piece marching brass band, whom together heralded the arrival of poker royalty at the Leicester Square Casino for Day 1A of the WSOPE* Main Event.

In an unexpected twist, the 11-time WSOP* bracelet holder stepped centre stage dressed remarkably low-key and in a conservative all-black ensemble – no funny hats, not a historic costume in sight – this time choosing to leave the theatrics to the fine British brass band and the modern-day rock star ‘wannabees’ creating the anticipation and the atmosphere with their Poker Face performance.

In recent years, Phil’s WSOP* entrances have become legendary for their larger-than-life characterizations. This year in Las Vegas, Hellmuth made his way to the Rio for the WSOP Main Event dressed head-to-toe as an MMA fighter, with MMA’s Octagon announcer Bruce Buffer by his side. The over-the-top entrance was in keeping with UB’s edgier 2010 WSOP theme.

Phil Hellmuth doesn’t reserve his grand entrances exclusively for Las Vegas. Last year, the legend of the game arrived at the Leicester Square venue in a magnificent horse-drawn carriage, leather sandals and all, evoking the mighty Julius Caesar. In 2008, the online poker site held a Phil Hellmuth lookalike contest and invited London locals to show up to the WSOPE dressed as the 11-time WSOP* bracelet winner.

So, love him, or love to hate him, one thing’s for sure; Phil is no shrinking violet, and he’s determined to make his presence known – at the poker tables and away from them.

World Series of Poker®, WSOP*, World Series of Poker Europe* and WSOPE* are trademarks of Harrah’s License Company, LLC (“Harrah’s”). Harrah’s does not sponsor or endorse, and is not associated or affiliated with, UltimateBet or its products, services, promotions or tournaments.

About UB.com
Raise. Stack. Own.
Built for the passionate poker player, UB.com offers top poker rewards, optimal tournament structures and fast-paced action games in one of the largest online poker communities in the world. Players can download the free poker software, play in free ring games and tournaments, plus meet and chat online with Phil Hellmuth and other Team UB pros to learn and enhance their playing strategy. UB provides the best poker games available on the net as part of the CEREUS poker network.