Eleven-time WSOP bracelet holder Phil Hellmuth prepares for another eye-grabbing grand entrance to the Casino at the Empire, Leicester Square in London on September 23rd 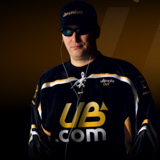 September 22, 2010 (Miami, FL) – London-town, forget about ‘Changing the Guards’ at Buckingham Palace, and move over Big Ben, because UB’s Phil Hellmuth, arguably one of the kings of the poker world, will make his grand entrance to this year’s World Series of Poker Europe* (WSOPE*) on Thursday, September 23rd, 2010 at The Casino of the Empire, located at 5-6 Leicester Square.

The London press and the local paparazzi will do more than a double-take in Leicester Square this Thursday afternoon at 4pm when UB Pro Phil Hellmuth makes his way into ‘the Empire’ to take his seat at the poker table for Day 1A of the WSOPE* Main Event.

In fine Hellmuth-fashion, expect the 11-time WSOP* bracelet holder to be up front and centre stage; the man of the moment will provide the focus of a curious mix of some fine British brass band ‘pomp and circumstance’ and modern-day rock star glam, so it will be no surprise if the crowds go a little “GaGa” for the entertaining spectacle in the Square.

While full details of exactly what Phil Hellmuth will do have not yet been revealed, if this summer’s WSOP entrance in Vegas is any indication, his London entrance will be one of the biggest highlights of the tournament.

Dressed as an MMA fighter – silken robe, boxing gloves and high-top trainers all part of the illusion – Hellmuth made his way to the Rio in Las Vegas for the WSOP along with MMA’s Octagon announcer Bruce Buffer by his side. The over-the-top entrance was in keeping with UB’s edgier 2010 WSOP theme.

Phil Hellmuth doesn’t reserve his grand entrances exclusively for Las Vegas. Last year, the legend of the game arrived at the Leicester Square venue in a magnificent horse-drawn carriage dressed as the mighty Julius Caesar. In 2008, the online poker site held a Phil Hellmuth lookalike contest and invited London locals to show up to the WSOPE dressed as the 11-time WSOP* bracelet winner. In 2007, Phil Hellmuth grabbed the European media spotlight once again as he toured London’s most famous sights aboard a Hellmuth-branded double-decker bus, accompanied by a swag of models.

So, love him, or love to hate him, one thing’s for sure; when it comes to Phil Hellmuth and his WSOPE* arrivals, simply expect the unexpected, and he’ll never disappoint.

Media and poker fans in the UK are invited to join Phil Hellmuth for his grand entrance at 4pm on Thursday, September 23rd, 2010 at 5-6 Leicester Square in London.

Those who are unable to attend can read about Hellmuth’s entrance on UB’s blog at http://blog.ub.com/. Real time updates can be followed at UB’s Twitter account: http://twitter.com/ub

World Series of Poker®, WSOP*, World Series of Poker Europe* and WSOPE* are trademarks of Harrah’s License Company, LLC (“Harrah’s”). Harrah’s does not sponsor or endorse, and is not associated or affiliated with, UltimateBet or its products, services, promotions or tournaments.

About UB.com
Raise. Stack. Own. Built for the passionate poker player, UB.com offers top poker rewards, optimal tournament structures and fast-paced action games in one of the largest online poker communities in the world. Players can download the free poker software, play in free ring games and tournaments, plus meet and chat online with Phil Hellmuth and other Team UB pros to learn and enhance their playing strategy. UB provides the best poker games available on the net as part of the CEREUS poker network.