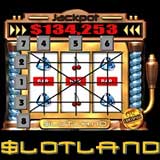 November 3, 2008 (London, UK) – For the third month in a row, the Slotland.com progressive jackpot has been hit for well over six figures bringing the total Autumn jackpot wins at the online slots and video poker site to a record-breaking $411,260. The most recent player to struck it rich at Slotland was MINE0MINE who won $134,253 playing the popular Golden 8 slot machine on October 23.

Quite uncharacteristically for the jackpot with a reputation for being hit so regularly, after a big win in March ($195K) there were no big progressive jackpot winners again until a $168K hit in August. That was the start of three in a row though – big jackpot wins pretty well monthly in August, September and now October.

“The size of the jackpot depends entirely on how many people add a little extra to their wager,” said Ondrej Tuma of Slotland. “Some players do it every wager, others only do it if they feel particularly lucky.”

The Golden 8 is a 9-wheel 8-payline slot machine featuring the largest slot wheels on the Internet. On the Golden 8 slot machine, the way to win the jackpot is to get three Bar symbols on any one pay line. The big jackpot pool can only be won if the player has bet the maximum three coins on that spin. The last jackpot win on Golden 8 was in May when TOPNOTCHED spun a $179,166 win.

The Slotland progressive jackpot is immediately re-set to $50,000 after a win. So many people around the world play at Slotland every day, and so many of them know it can really pay off to play the progressive, it can reach six figures again very quickly.

“It’s funny how it happens sometimes,” said Tuma. “No jackpot wins over the summer and then bam, bam, bam – three in a row.”

About Slotland.com
Established in 1998, Slotland.com is renowned for its fairness, security and sincerity. Slotland.com’s progressive jackpot is currently won on average every six weeks and usually stands at over $100,000, making it one of the most frequently won jackpots on the Internet. In 2005, the pioneering entertainment company introduced its first slot machine for the mobile phone/PDA platform. Slotland.com has been voted “Most Unique Slot Site” and “Best Progressive Jackpot Site” by Strictly Slots Magazine readers, named “Best Web TV” in a Gambling Online Magazine poll, and selected as a finalist in the ME Awards “Best Mobile Gambling Company” category. The philanthropic company continues to sponsor the school and community they built in Malawi (www.help-malawi-children-charity.org). Earlier this year, Slotland.com launched a free 3D casino, WinADay.com, a whole new kind of online casino experience with realistic three-dimensional lobbies and virtual casino employees to assist with the free instant-play Flash games, as well as FreeSlot.com which features free non-stop slots tournament with nearly $10,000 in weekly prize money.