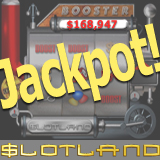 20 August 2008 (London, UK) – It’s taken a little longer than usual but Slotland’s progressive jackpot has just been hit for $168,947. A player known as “MRSSMITHS” won the jackpot playing the Booster slot machine.

Historically, Slotland’s progressive jackpot is hit fairly regularly – about every six weeks – for just over $100,000. Lately, it’s taking a little longer to be hit but the last few winners have won much bigger jackpots.

The progressive can be played on any of the unique online slot machines and video poker games on the Slotland.com web site. Most of the games are also available on mobile phones and PDAs where they are tied into the same progressive jackpot. The next big winner could be at their computer or anywhere they take their mobile phone.

“I think a lot of people thought our progressive jackpot would be won after it hit the $100,000 mark,” said Martin Smith of Slotland. “Every day that it kept going up and up without being won just amazed us!”

Booster is a three-wheel, single-payline slot machine game with a special wild “boost” symbol. When it is going to appear, the game is interrupted and players are given the option of keeping their current bet or boosting it tenfold. This can mean amazing winnings on a single spin, but that’s not all that makes Booster a unique slot machine. No bet is lost at the Booster game. Every bet that does not win is added to a special fund. The fund can be cashed anytime for ten percent of its value, or players can choose to try to recover ALL of their bets on a special win/lose spin. Booster is one of 6 games also available on Slotland’s mobile platform (wap.slotland.com).

Each time a player “plays the progressive” a portion of their wager is added to the progressive jackpot pool. Since all the games on the site are tied to the same jackpot the value can increase very quickly and to very large amounts.

In March, a lucky Canadian player won the biggest Slotland progressive jackpot ever: $195,083 (€126,910). He was playing Treasure Box, one of the most popular slot machines on the site which now features 6 unique slot machines and 4 video poker games. JAMKAT2 won a $113,418 (€89,067) progressive jackpot playing “Treasure Box” last year. Prior to the Canadian win the biggest jackpot ever won at Slotland was $179,166 won by TOPNOTCHED playing the Golden 8 slot machine last May. The last player to win a large jackpot playing on their phone was OLYMPIAGOLD who won $163K playing the mobile version of Lucky Stars in early 2006.

For further information about this jackpot win or Slotland’s online and mobile casino games, please contact:

About Slotland.com
Established in 1998, Slotland.com is renowned for its fairness, security and sincerity. Slotland.com’s progressive jackpot is famous for being one of the most frequently won jackpots on the Internet. In 2005, the pioneering entertainment company introduced its first slot machine for the mobile phone/PDA platform. Slotland.com has been voted “Most Unique Slot Site” and “Best Progressive Jackpot Site” by Strictly Slots Magazine readers, named “Best Web TV” in a Gambling Online Magazine poll, and selected as a finalist in the ME Awards “Best Mobile Gambling Company” category. The philanthropic company funded the development of a school and community center in Malawi (help-malawi-children-charity.org).