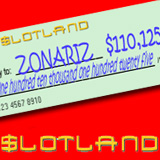 Last week’s big winner was a player known as ZONARIZ who won $110,125 (€87,728) playing one of Slotland’s popular video poker games, Striking 7s. Striking 7s is a Romanesque variation of the popular Deuces Wild video poker game. While this is the seventh major jackpot this year at Slotland, it is the first one on Striking 7s. The last time the jackpot was hit on one of the sites three video poker games was in August when MSMIKEY won $108,060 (€86,083) playing the Jacks or Better game.

“This seems to be gaining momentum,” said Slotland. “The more people hear about big jackpot wins, the more people that play our games. The jackpot goes up every time a player places a max bet, so more players means the jackpot is growing pretty fast these days!”

A $168K win on Booster in July, $88K on Wild Heart in May, $91K on the new Four Cast in April and — the largest win ever — $195K on Treasure Box in March, bring the total progressive jackpot wins for the year to nearly a million dollars (over seven hundred thousand Euros).

With the launch last month of it’s latest game, Megaspin, Slotland.com now features thirteen unique slot machines and three video poker games. Four of the most popular online slot machines and two video poker games are also available on mobile phones and PDAs. All of Slotland’s games give players the option of placing a maximum bet for a chance at the progressive jackpot. All of the slots and video poker games on the mobile network are also tied to the same jackpot pools. Slotland is available in Spanish at Es.Slotland.com.

About Slotland.com
Established in 1998, Slotland.com is renowned for its fairness, security and sincerity. Slotland.com’s progressive jackpot is won on average every six weeks and usually stands at over $100,000, making it one of the most frequently won jackpots on the Internet. In 2005, the pioneering entertainment company introduced its first slot machine for the mobile phone/PDA platform. Slotland.com has been voted “Most Unique Slot Site” and “Best Progressive Jackpot Site” by Strictly Slots Magazine readers, named “Best Web TV” in a Gambling Online Magazine poll, and selected as a finalist in the ME Awards “Best Mobile Gambling Company” category. Earlier this year, Slotland.com launched a 3D casino, WinADay.com, a whole new kind of online casino experience with realistic three-dimensional lobbies and virtual casino employees to assist with the free instant-play Flash games, as well as FreeSlot.com where new players can play slot machines for free. Players can check for current news at www.twitter.com/slotland.