Other frequently- hit slots jackpots overdue for a big win. 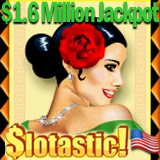 Jackpot Piñatas is a 5-reel 20-payline slot machine with festive Mexican images. In addition to the main seven-figure jackpot, there is also a generous secondary jackpot. The main jackpot pays out when five Bull Piñata symbols line up on any one line with a minimum $.25 bet on all 20 pay lines. Three or more Dog Piñata symbols trigger the Bonus Round with prizes up to 200x the original bet and lead to up to 25 free spins afterwards.

Considered a “loose jackpot“, the Let ‘Em Ride jackpot has paid out fourteen times since it was launched and seldom goes more than three weeks without a $50,000+ win. Three games contribute to it — Caribbean Stud, Caribbean Draw and Caribbean Hold ‘Em – so that jackpot also gets hit quite frequently for similar amounts. Since it is hit on average every three to four weeks, and it has now been more than a month, many players feel these games are overdue for a hit which explains its recent popularity.

Jackpot Piñatas is the current Slot-of-the-Month at Slotastic, so until the end of October players can receive a deposit bonus of up to $100 for this game. The required coupon code for this bonus is POMPARTY.

“Smaller wins along the way keep slots players’ adrenaline flowing,” said Oliver Smith, manager of Slotastic.com. “But everyone dreams of winning the big one. We would love to make a million dollar payout. The money is just sitting in a special fund waiting for the lucky winner! But let me tell you, it’s also pretty exciting writing a $50,000 check!”

When asked what they would do if they won the 1.6 million dollar Jackpot Piñatas progressive jackpot, Slotastic players were practical and generous, but said they’d indulge themselves as well.

“I have two grandchildren in college so I’d help them out. And I suppose I’d pay off my mortgage and some other bills,” said one player. “Honestly though, I really don’t know what I’d do with that much money – but I’d love to find out!”

“I think a luxurious holiday for my whole family would be in order for starters,” said another player. “Considering the theme of the game, I think a few weeks in Mexico would be ideal!”

“My daughter’s really been having a tough time of it since her husband was laid off work,” said another player. “I’d love to be able to help them out more, so I’d take care of them first I guess. I just love playing slots though so I think it’d be alright to treat myself to a little trip to Las Vegas too if I struck it rich like that!”

Known for its massive jackpots, Slotastic.com is also famous for its daily slots tournaments and special “added money” tournaments like the upcoming Halloween Slots Tournament where they add $1000 to the prize pool. Tournament contestants can register and play anytime between now and midnight, October 31st. Current top scores are listed on the live leader board and the player at the top of the list at midnight on Halloween night wins the tournament.

Slotastic.com is a full-featured online casino with games and promotions designed especially for online slots enthusiasts. It is the home of the largest online progressive jackpots available to American players and the best online slots tournaments.

Prev: iGB Espana’s Spotlight on the Growing Latin American Marketplace Next: Another $5000 of $23,000 Prize Pool Up for Grabs in Upcoming OFC Mega Money Tournaments at Intertops Poker