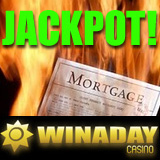 1 July 2011 (London, UK) – The online slot machine jackpot at WinADayCasino.com was hit for a record-breaking $225,727 at the height of the unique online casino’s third birthday celebrations last week. The jackpot winner, a practical-minded accountant, says rather than blow the win on holidays and luxuries he’ll do the fiscally responsible thing and use the quarter million dollar jackpot to pay off his mortgage.

“Our progressive jackpot can be won anytime on any of our slots games,” said Michael Hilary, manager of the no download casino. “But this is the fourth time we’ve had a six-figure jackpot winner on the Vegas Mania slot machine! That’s more than any other game. Reel De Luxe and Wheeler Dealer – one of the games we opened with three years ago – have each had two big jackpot wins. Vegas Mania is the only one to have had four!”

The WinADay jackpot is usually won around the $150,000 mark but has gone much higher several times in the casino’s first three years. In March 2010 it rose to a record $224,420 before it was won by a retired widower. Since all the slots at WinADay contribute to one big progressive jackpot, and since the casino has been particularly busy due to some generous birthday promotions recently, it quickly rose to the record high level after a $167,648 in May.

The latest winner, Dereck O., is known as MRBIG on the site and has been playing at WinADay for about a year. Until now he’s divided his playing time between four favourite slot machines: Vegas Mania, Leprechaun Luck, Fair Tycoon and Tropical Treat. Although he said it was hard to pick an absolute favourite from the lot, Vegas Mania will obviously have a special place in his heart after his fantastic luck on that game.

Making its debut just over a year ago, Vegas Mania is a five-reel, 21 pay line slot machine where players get up to fifteen free spins, Wild symbols increase the chance of winning and Double Wilds double winnings. Vegas Mania is a high stakes slot machine with a total maximum bet of $84 per spin. Players can win up to 3000 times the betted amount.

Coincidently, it’s also the Game of the Month for July so players can get a chance to win up to $250 in a month-end draw just by playing it. At the end of the year one 2011 Game of the Month player will win a dream vacation prize. (Details posted on site.)

WinADay is an instant casino with 25 online casino games including slots, video poker, Keno and Roulette.

A video version of this story is available on the WinADay Facebook page where
players interact with each other: http://www.facebook.com/winadaycasino

About WinADayCasino.com
A product of Slotland Entertainment S.A., WinADayCasino.com is a whimsical instant-play Flash casino offering unique free and real-money slot machines and card games that are available only at WinADay. All of the one-of-a-kind games are tied to one progressive jackpot. Generous deposit bonuses, game-of-the-month bonuses, daily random draws bonuses and frequent six-figure progressive jackpot wins have made this casino popular around the world.WinADay’s affiliate program is managed by SlotlandAffiliates.com. WinADay players interact with each other and receive special casino bonuses on Facebook: www.Facebook.com/WinADayCasino.