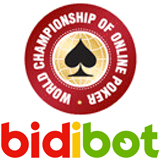 16 September 2010 (London, UK) – A seat at the PokerStars World Championship of Online Poker (WCOOP) valued at $1,050 is on the block at online poker penny auction site Bidibot.com. The seat for Tuesday the 21st poker tournament will be auctioned on Sunday 19th September and if the recent GUKPT seat that went for $16.03 last week is any indication, it could go for pennies.

“PokerStars is a brand that resonates through the poker fraternity and we’re delighted to have them on board with Bidibot,” said Bidibot CEO, John Tabatabai. “Partnering with such a renowned and trusted brand really brings home the value we’re offering with our penny auctions and we’re very excited about the packages that we’ll be rolling out in the near future… watch this space!”

In Bidibot’s continuous online auctions, poker players bid on poker credits at their favourite online poker rooms like 888.com, VictoryPoker and Betfair placing as many one cent bids as they like until the auction is over. Each new bid adds another 30 seconds to the countdown timer until, sometimes after some fast and furious bidding in the final moments, $10 – $200 poker credit packages routinely sell for just a few dollars.