Best depiction of a true “player” to receive cash and a night out with PlayersOnly.com Hostess & Playboy/FHM model Carrie Stroup 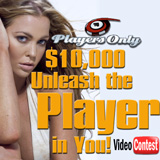 January 15, 2008 (St. John’s, Antigua) — PlayersOnly.com – the entertainment site hosted by Playboy/FHM model Carrie Stroup – is running a $10,000 contest on YouTube. Contestants are invited to submit video clips showing themselves and their friends demonstrating what it takes to be a “player”. Secrets for success, sleezy pick-up lines, tongue-in-cheek dress-to-impress wardrobe tips – anything goes. The winner will receive a $10,000 prize and – any true player’s dream prize — a night out with the site’s sexy hostess.

PlayersOnly.com presents
Unleash the Player In You $10K Video Contest
Voting ends and winner announced February 15, 2008
To enter or to view entries: www.YouTube.com/group/UnleashThePlayer

Anyone (over 18) can enter the free contest at the “PlayersOnly Unleash the Player In You Video Contest” page on YouTube, www.YouTube.com/group/UnleashThePlayer. Contest entries will be available for viewing there and viewers are invited to assist the judging by commenting.

The rules of the game are simple: video yourself and/or your friends acting like a true “player” or, for a laugh, the exact opposite. Pay tribute to successful, confident players you admire, or parody wannabe players that just don’t get it.

“Everybody’s got a little ‘player’ in them” said David Anderson, PlayersOnly.com Brand Manager. “This is a chance to have some fun and win big cash.”

What’s it take to be a player? Confidence. Smarts. Style. Balls. You know the guy – he’s got the dream job, sweet wheels, cool clothes. Women can’t resist him (although his mom wishes he’d settle down), the guys think he’s cool – and he’s probably a winner at the poker table.

Players love poker because it’s a microcosm of real life. Be sharp, think fast, take some risks – success is sweet. Looking the part is important in life as it is in poker –bluffing being part of both games. There’s no game that mimics the player’s life more and draws on his personal discipline, critical reasoning, money management skills and strategic thinking.

The winner of the contest, to be announced on February 15th, will receive a $10,000 deposit in their PlayersOnly.com account. PlayersOnly.com will also pick up the tab for a night out with their sexy and charismatic hostess, Carrie Stroup.

Carrie Stroup is the video hostess of PlayersOnly.com’s recently re-designed poker, casino and sportsbook site. She appeared in Playboy Magazine in September and in FHM in October of this year and had a whole room full of players drooling when she hosted PO’s WSOP party in Las Vegas last July. (Video clip from that event here: http://vids.myspace.com/index.cfm?fuseaction=vids.individual&VideoID=12494914). Carrie has also appeared in NBC’s “Scrubs” and movies “Cellular”, “Starsky and Hutch”, “The Girl Next Door”, and “Redline”. She was in the MTV pilot “Living the Dream” and hosted “VIP Parties Uncensored”.