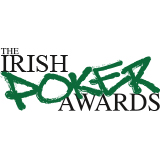 24 October 2012 (London, UK)- The Irish Poker Awards, presented by Bluff Europe and sponsored by BoylePoker.com, were held at the Regency Hotel, Dublin, on Sunday night, with the cream of Irish poker in attendance to honour their peers and celebrate a great year for Irish poker. Bluff Europe editor Philip Conneller and former Irish Open Champion Neil Channing were on hand to call the shots and distribute the gongs, with Eoghan O’Dea picking up the coveted “Player of the Year” award and an emotional Padraig Parkinson voted “Irish Poker Legend”.

Host Philip Conneller said, “The Irish poker scene is unique in the sense the sense of fun and the party atmosphere that surrounds the tournaments. Everyone else takes themselves way too seriously. It’s that uniqueness were here to celebrate, as well as praising the skill of the Irish. The winners were voted for online, completely democratically, which is important because it means there are no politics involved in the event and that gives the awards credibility. The people have spoken and congratulations to all our winners.”