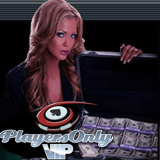 February 27, 2008 (St. John’s Antigua) – This week, PlayersOnlyVIP.com players are winning their way to Saturday’s monthly final in the site’s richest poker tournament ever, the Million Dollar Free Roll series. A player that came close to taking it all last month hopes to win the $75,000 first prize this weekend.

“Just get this over with” moaned one of the other players at last month’s Final Table as the tournament’s eventual winner was dealt a pair of Queens. The hand began a series of winning hands that won “TylerC” the monthly championship and $75,000. But PlayersOnlyVIP.com player “Swancott21”, a college student from New York, didn’t give it up easy and held his own until the bitter end.

“Fastest final table I’ve ever seen“ said another player when “Swanscott21” was dealt 4h8s and forced to fold moments into the final hand.

As part of the fastest growing poker network, PlayersOnlyVIP attracts a healthy mix of new and inexperienced poker players.

“Some of the guys on the network are pretty hard core poker players. I’m just a little fish from PlayersOnlyVIP that got lucky and almost won last month,” said the surprised near-winner. “I’ve won my way to the final table again this month but let’s be realistic – let’s just say if I don’t get eliminated too quick I’ll be happy!”

“Free roll tournaments bring out all kinds of recreational players,” said David Anderson, manager of PlayersOnlyVIP.com. “All you’ve ever got to lose is your tournament entry fee so the pressure’s off. If you win your seat in a qualifier during the week, well, then you have nothing at all to lose!”

Full tournament details and schedules are available at www.playersonlyvip.com/1million.