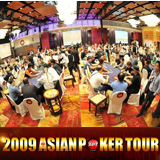 22 April 2009 (Manila, Philippines) – The Asian Poker Tour, Asia’s original poker tour, is delighted to announce that a number of leading online poker rooms have already signed up to provide online qualifiers for its popular Macau event. Last year’s six day event will be transformed into a record breaking 12 day extravaganza, creating Asia’s first festival of poker. The Asian Poker Tour Macau Festival will run from August 12–23, 2009 at the Galaxy StarWorld Hotel and Casino in Macau. The success of the Asian Poker Tour sponsored poker room at the Starworld has led organizers to lay out these ambitious plans that represent another huge leap forward for poker in the region.

Amongst the online poker rooms and networks already committed to sending players are the iPoker Network, PartyPoker and Ongame Network, the third, fourth and fifth largest online poker networks respectively. In addition, online rooms Bwin, PKR, Dafa Poker, JBET Poker, Betfriends and 32Red will also be in on the action guaranteeing a significant online qualifier contingent. More online poker rooms are expected to sign up for the landmark event shortly.

Asian Poker Tour CEO Chris Parker said: “We are very encouraged by the enthusiasm of our partners to send players and we look forward to welcoming more online poker rooms on board. This year’s Asian Poker Tour Macau Festival will be bigger and better with 12 days of non-stop poker action and fun. The Main Event has been extended, with the first of three day ones getting underway on August 19 and the televised final table scheduled for August 23. The Asian Poker Tour Macau Festival will feature a side event schedule never seen in Asia before, including several new formats that will stir the curiosity of poker enthusiasts at all levels.”

“We are currently witnessing record numbers in our Asian Poker Tour sponsored room at the Starworld and six figure $US pots are now a regular occurrence. We believe Asia is ready for its first festival of poker and that it will establish Macau as an essential stop on the international circuit.”

Organizers and leading tournament director Matt Savage, fresh from a successful revamp of the LA Poker Classic, promise a lengthy and varied side event schedule that will appeal to all tastes, details of which will be confirmed in the near future. The buy-in for the Main Event is set at US$4,300 (US$4000+$300) while high-limit games and sit-n-go tables will run throughout the duration of the festival. Last year’s event hosted a HK$1,000,000 (US$129,000) high rollers game and this will be repeated but with the Asian Poker Tour sponsored poker room at the Starworld now experiencing six figure $US pots regularly, the stakes are expected to be significantly higher this year! As well as the action on the felt, the play off the felt promises to be extremely lively too with The Asian Poker Tour looking to top the legendary and award winning party held in Macau last year.

The last Asian Poker Tour event was held in the Philippines in January 2009 and was won by Manila rounder Neil Arce, who scooped US$185,000 for first prize after overcoming a field of 262 players from over 40 countries. The runner-up was the Republic of Korea’s Steve Yea, who repeated his second place in the Asian Poker Tour Macau 2008. Full details can be found at http://www.asianpt.com/
###

ABOUT ASIANLOGIC (ALOG) OWNERS OF THE ASIAN POKER TOUR
AsianLogic is a leading online and land-based gaming company focusing on the Asia-Pacific markets. The Company is listed on the AIM market of the London Stock Exchange (AIM: ALOG). AsianLogic owns and operates eight online casino brands and two online poker rooms as well as land-based sportsbook operations through its MegaSportsWorld brand. It is a specialist in Asia-specific games such as Mahjong, Cho-Da-Di, Do-Di-Zhu and 13 Card Poker. The Company owns and operates the Asian Poker Tour. The Company also maintains a corporate advisory team specialising in the gaming sector which is an active investor in gaming-related businesses as well as providing consultancy and analytical services. AsianLogic enjoys strong commercial relationships with leading gaming providers including Playtech, ID Games and LVS. Founded as ESL in 2002, AsianLogic employs over 300 employees, the majority of whom are based in the Philippines.