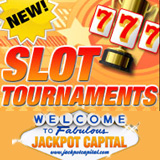 16 June 2010 (Nicosia, Cyprus) – Slots tournaments are a great way to win big risking very little but until now they’ve been scarce. However, US-friendly JackpotCapital.com, already famous for having the best games and biggest progressive jackpots available to American players, is now hosting daily slot machine tournaments. Players can enter for as little as $1.10 and win cash from jackpot pools that can be several hundred dollars or, as they were for the inaugural free roll tournaments last week, up to $1000.

“Many of our players had been asking for tournaments so we knew they’d be popular,” said casino manager Oliver Smith. “But we were amazed at how quickly our first free rolls last week reached more than 500 players! We’ll definitely be doing more of those.”

Since all that can be lost is the entry fee, slots tournaments are a great way to enjoy playing slots while risking only a few dollars. Almost daily, there’s a tournament being played on the Crystal Waters slot machine with an entry fee of only $6.60. If 100 players register, the prize pool will be $600. That will be split between the top ten players with the winner receiving over $200. There will also be several tournaments this weekend where the buy-in is $11 so the prize pools could be much higher.

JackpotCapital’s “Meet the Staff” contest continues until the end of June. Earning points by depositing and playing as they normally would, players are introduced to the staff beginning with the Customer Service and VIP Player teams and progressing, ultimately, to the Casino Manager’s office. Everyone that makes it to the boss’ office by the end of the month will be entered into a draw for a cash bonus. Jackpot Capital’s Facebook Friends will find related quizzes and contests giving them even more opportunities to get to know Jackpot Capital and earn additional bonus offers on the casino’s Facebook Fan Page. Further information is available at the interactive office where players can also monitor their progress in the game: http://promotions.jackpotcapital.com/meet_jackpotcapital

JackpotCapital.com is home to the biggest progressive jackpots available online to US players. At over $1.6 million, the Jackpot Pinatas jackpot is the largest jackpot available, but two other jackpots have also reached seven-figures. The Aztec’s Millions jackpot and the jackpot tied to both the Mid-Life Crisis and Shopping Spree slots are all well over $1 million.