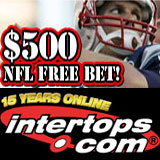 “All eyes were on Aaron Rodgers in last year’s NFC Championship Game, and they will be again on Sunday,” said an Intertops Sportsbook spokesperson. “But let’s not forget that the Packers’ final step to the Super Bowl was only sealed when the Bears’ third-string quarterback, Caleb Hanie, was intercepted just 12 yards from a game-tying touchdown.”

In other key Week 3 battles Intertops favors the New Orleans Saints to use home-field advantage to get past the fast-improving Houston Texans, and expects the Pittsburgh Steelers to pile on the agony for the winless Indianapolis Colts on Monday Night.

Intertops will make one NFL football fan’s dream come true by sending them to Super Bowl XLVI in Indianapolis February 5th. Every dollar wagered on Intertops’ NFL bet offers during the Regular Season earns one entry into the end-of-season draw for an amazing Super Bowl XLVI prize package that includes accommodation at a top hotel, two reserved top tickets to the game, plus expenses for flights. For those who already have a hunch about who will win the Vince Lombardi Trophy next, Intertops has updated its Super Bowl odds following the Week 2 action.

And that’s not all: Every player wagering at least $200 on every game day of the NFL Regular Season will receive a $500 free bet after the final week of play.