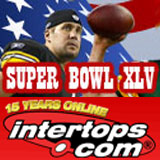 February 1, 2011 (St. Johns, Antigua) – Intertops Sportsbook favors the Aaron Rodgers and the Green Bay Packers (-145) to beat the Pittsburgh Steelers (+125) at Super Bowl XLV in Arlington, Texas on Sunday. The world’s first online sportsbook is offering dozens of betting propositions on the USA’s biggest game of the year, a special $100 deposit bonus and the chance to win $5000 in February.

Intertops bookmakers predict that the leader of the pack Rodgers (+150) is more likely to be named Super Bowl MVP than his Steelers’ counterpart Ben Roethlisberger (+300). Other bets on the quarterbacks include Net Passing Yards and Number of Interceptions.

“Roethlisberger and Rodgers have both been in dominant form this season,” noted an Intertops Sportsbook manager. “Roethlisberger already has two Super Bowl rings, but we expect Rodgers to handle the pressure on his Super Bowl debut.”

With the Black Eyed Peas playing at half time, Intertops bookmakers have had some fun naming some special bets after many of their hits. The “Just Can’t Get Enough” bet puts odds on Ben Roethlisberger scoring three or more touchdowns in the first half at +750. The “Rock That Body” offer puts Aaron Rodgers’ chances of being sacked 4 or more times in the first half at +700.

In addition to a comprehensive line-up of Super Bowl betting propositions, Intertops is giving away loads of free money. Between now and Sunday’s kick-off they’re adding 20% (up to $100) to all deposits. Also, every customer who wagers at least $10 in the Intertops Sportsbook every day during the month of February is automatically in the draw for a $5,000 prize with no rollover requirements! And if the game goes to overtime, Intertops will refund all Total Number of Touchdowns Scored bets.

Last month, Intertops celebrated the fifteenth anniversary of the day it took the world’s very first online sports bet. Since then many brands have come and gone but Intertops is still one of the most trusted igaming operators in the world. The internet’s first sportsbook continues to welcome players from around the world and is known for quick, hassle-free deposits and withdrawals and excellence in customer service. Intertops also operates a US-friendly online casino with more than 300 games and some of the biggest jackpots available anywhere, as well as one of the world’s most popular online poker rooms.

All odds are valid as of today but subject to change.

About Intertops
Intertops was founded in 1983 in London with a UK Bookmakers License and relocated to Austria in 1992. In 1997, the online business moved to Antigua while the traditional sports betting business remained in Austria. 1998 saw the launch of one of the first Microgaming online casinos. Last year the company began licensing casino games from RTG. In 2001, the Intertops developed the first mobile betting application, enabling customers to bet with mobile phones anywhere, anytime. By 2003 Intertops.com began online poker operations, progressing to online skill-based gaming in under a year.