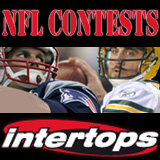 October 9, 2012 (St. Johns, Antigua) – The NFL season is well underway and Intertops Sportsbook adds to the excitement with its weekly NFL Pool Competition and Super Bowl tickets giveaway. Every Tuesday throughout the Regular Season the popular sportsbetting site posts odds on the upcoming NFL games, as well as dozens of further props for all football fans.

Odds on the latest NFL games have just been posted and in Week 6 all eyes are on the Packers at Texans showdown on Sunday night. Can the pre-season Super Bowl favorite from Green Bay get out of its slump on the road at high-flying Houston? The early Intertops line sees the hosts as a 5-point favorite.

Every week throughout the NFL Regular Season customers can win bet tokens worth up to $100 by predicting the winners of the week’s action in Intertops’ NFL Pool Competition. It’s free to enter so there’s nothing to lose.

The ‘Win a Trip to Super Bowl XLVII’ contest also continues throughout the Regular Season. Every dollar wagered on NFL games up to and including Week 17 means an extra chance to win a deluxe trip for two to New Orleans. The grand prize includes accommodation at a top hotel, 2 reserved top tickets for Super Bowl XLVII and flight expenses.

The earlier you follow your Super Bowl hunch, the better your chance of making big money when the champion is crowned in February. Going into Week 6, Intertops sees the Texans (+400) as favorite to win it all, closely followed by the Patriots (+500), the 49ers (+500) and the Falcons (+700).

Intertops took the very first online sports bet way back when and continues to provide the best odds and customer service to sports bettors around the world.