Players get $10 back when they register for $5 buy-in 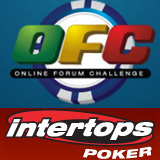 November 9, 2010 (St. Johns, Antigua) – Since they can receive a $10 bonus when they pay $5 to enter this weekend’s OFC “Everyone’s a Winner!” tournament at Intertops Poker, players are ahead of the game before the first card is dealt. Intertops has put up $2,000 in prize money for Saturday’s Freeroll and added another $3,000 to Sunday’s $5 Buy-in, so several lucky poker players will be able to fly home for Thanksgiving first class this year.

This is the second of three OFC Mega Money weekends at Intertops. The popular poker site will put up a total of $23,000 in prize money for the poker tournament series that began in October, will continue mid-December and conclude with a $2,000 Freeroll in January.

The $2,000 Freeroll poker tournament is on Saturday, November 13th, 2010 at 3:17pm EST. In addition to the $2,000 prize pool provided by Intertops Poker, another $500 will be awarded to the poker forum whose members performed best. Players must register by November 10th to compete.

OFC Mega Money Events are produced by Global Gaming Events. Players represent their favorite online poker forums and communities to compete for prizes in tournaments with thousands in added cash provided by the hosting poker site. In addition to individual prizes there are Forum Prizes awarded to the best performing community sites based on their players’ performance. The prize pool put up by Intertops for this series is the largest overall prize pool for any GGE series since it started running its massive added prize pool tournaments over four years ago.

Over 2,000 players pre-registered for the last set of events. JJkriziss representing UAPoker Info won the Intertops Mega Buy-in Event in October. $1,000 in forum prize was split between Ray101bassman, UAPoker, SlyDawgPoker, Bankrollmob and Holdem Poker Chat. buzyon of FreerollsForum won the Intertops $5,000 Freeroll. Eddycaddy of PromoPoker was second and MARC4696 of MECZ.PL ran third. PromoPoker, FreerollsForum, Holdem Poker Chat, MECZ.PL and Poker Listings topped the poker forums that took a share of the $500 in Forum prizes.

There will be another set of OFC Mega Money Tournaments at Intertops in December. Everyone that plays in two of the three Buy-in Events held this fall will be eligible to play in a $2,000 Freeroll to be held on January 15th, 2011.

November tournament details and pre-registration are available at http://www.globalgamingevents.com/ggesys/event_register.php?id=39.

* Players must play in the tournament and have made a deposit or reload in the 30 days prior to qualify for bonus.

About Intertops Poker (www.intertops.com/poker)
Intertops.com launched Intertops Poker in 2003 and re-launched 2010 with the popular Cake Network. Intertops Poker is a global poker room offering innovative and top-quality software to give all players an enhanced poker experience. Texas Hold’em, Omaha ring games and tournaments of all stakes and levels are running 24/7. Players can win their share of over $20 Million in monthly tournament payouts. Intertops Poker also offers all players access to one of the most lucrative loyalty programs in the industry. New players receive a 110% bonus up to $600 and have $6 million in tournament guarantees every month.

About Online Forum Challenge
Global Gaming Events was launched early 2006 and is the premier facilitator of multi-forum events. With over $700.000 in cash and prizes awarded so far, GGE brings value added tournaments to new players and depositors, while allowing affiliates to promote an operator with their own affiliate links. All inquiries should be addressed to support@globalgamingevents.com.