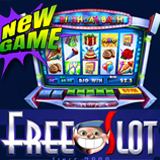 FreeSlot.com is a totally free casino game site where players can play as many slots as they like for as long as they like without spending a penny. Cash prizes are paid every day to the top point scorers for the day.

“It would be fun to win $50 I guess but I’m really not playing for the money,” said one regular player. “It’s nice to be able to play such great games absolutely free!”

Birthday Bash has a very low minimum bet of only 0.01 credit coins giving players maximum playing time for their credits. It has a “Hold” feature that lets them freeze reels with high symbols or symbols that can form a winning combination. When the Present symbol appears the Pick Me Bonus Game begins and birthday presents reveal generous prize multipliers.

“We’re committed to introducing a new game every month,” said Freeslot’s manager. “So far in 2013 we’ve added Birthday Bash and Enchanted Gems. I won’t tell you what we have planned next – but there’s usually a hint about it on our Facebook page…”
To receive extra credits, bonus rounds and resets players should search for “Freeslot” on Facebook.

Delighting online slots players with free slot games since 2000, Freeslot.com offers more free slot tournaments with cash prizes than any other free slots site. All games at Freeslot.com are completely free to play. Thousands of players enter daily free slots tournaments, winning $10, $25 and $50 cash prizes. So far more than $225,000 has been awarded.

About FreeSlot.com http://www.freeslot.com
Online since 2000 and recently re-launched with a whole new look and game selection, FreeSlot.com offers a wide selection of unique online slot machines that are absolutely free to play. Registered players can win cash prizes in free daily slots tournaments. The site has so far paid out over a quarter million dollars in winnings.