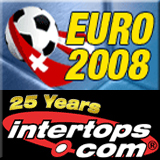 June 4, 2008 (St. John´s, Antigua) – This month, soccer fans around the world are focused on Austria and Switzerland – hosts of Euro 2008, the biggest soccer event of the year. Those that want to put a little money on the action will find a full range of odds and props at Intertops.com, the world’s first online sportsbetting company.

Since it was founded 25 years ago, Intertops has covered six Euro tournaments and, with their widest offer of bets ever, has odds on every game in this year’s month-long tournament that begins Saturday.

Two years after missing out on the World Cup title in its own country, Germany is favoured to claim the Euro title. Intertops.com/Sportsbook has odds on who will win the final match as well as every quarter- and semi-final match leading up to it. Intertops.com also has odds on everything from whether or not it will rain in Vienna the day of the final to whether or not Germans will get a tax free day should their team win the title.

Will German Pope Benedict sing “We Are the Champions” if Germany beats Italy in the final? With odds at +66500, Intertops.com oddsmakers would appear to doubt it.

“The most popular bet is who will win the final,” said Michl Posch of Intertops.com. “But we’re seeing a lot of action on the games leading up to the final as well. We’ve got so many betting propositions for each of those games – who’ll score the first goal, who’ll lead at the half, which player will score the first goal…”

Going into the tournament, the bookmakers at Intertops.com are hoping for a final pairing of Austria vs 2004 champ Greece. Their worst-case scenario would be a final showdown between Germany and Italy with the Germans winning after a penalty shootout.

Anyone looking for that extra kick will appreciate Intertops’ wide range of LIVE bet offers on every game. Customers can enjoy the game on their TV and place their wagers until shortly before the final whistle. The live odds change according to the action on the field.

Experienced bettors are particularly fond of parlay bets, which allow greater winnings by combining the odds for single wagers and boosting the total odds. Intertops has “Germany to win Euro 2008 and Patriots to win Super Bowl XLIII” at +1700. And the book is covering the US elections as well with bets like “Spain to win Euro 2008 and Obama to become president” at +900.

“We expect the total wagering turnover during Euro 2008 to be equivalent to our turnover for the 2006 World Cup where twice as many games were played,” said Posch. “Soccer fans get extremely excited about this championship and they love to wager on it.”

Dozens of Euro 2008 odds and props are posted in American, Decimal and Fractional formats at Intertops.com/Sportsbook.

ABOUT INTERTOPS
Intertops was founded in 1983 in London with a UK Bookmakers License and relocated to Austria in 1992. They accepted the world’s first online bet in 1996. In 1997, the online business moved to Antigua while the traditional sports betting business remained in Austria. 1998 saw the launch of one of the first Microgaming online casinos. In 2001, the innovative company developed the first igaming WAP sites, enabling it to be the first to offer mobile bets. By 2003 Intertops.com began online poker operations, progressing to online skill-based gaming in under a year.