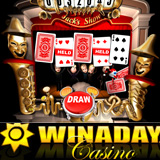 15 June 2010 (London, UK) – Regular players at WinADay.com know that when the progressive jackpot gets as close to $200,000 as it was last week it can’t be long before it’s hit. And sure enough, it was! A film student won more than enough to pay off his student loans when he won $200,859 playing the site’s popular video poker game, Jack’s Show.

“I was just killing time taking my mind off my studies for a bit when suddenly, out of the blue, I hit the big one!” said the player known as LUCKYTOM. “I’ll probably blow some of this win on some party celebrations but I’m going to invest most of it in a film project I’ve been wanting to do for a long time.”

This is the second highest win ever at WinADay.com, the largest being the $223,420 jackpot won by a retired widower playing the Reel De Luxe slot machine in March. Before these last two wins, the WinADay jackpot was usually hit every six weeks for $100,000 to $150,000. If these last two jackpots are any indication, bigger jackpots hit more frequently could become the norm.

“We’ve added several new games recently so the casino has been even busier than usual,” said online casino manager Michael Hilary. “Many of our regular players knew we were a bit overdue for a big win so more of them have been placing max bets and going for the jackpot lately. Every time they do, part of their wager goes into the jackpot pool so recently it had been accumulating ever faster than usual.”

After adding a new game every month for the last few months the unique online casino now has 15 one-of-a-kind games: nine slot machines, four video poker games and Roulette 5 which combines slots fun with the thrills of Roulette. All games are instant-play so there’s no downloading or installation required.

“We have our own team of games developers that create all of our games, only for us,” said Hilary. “You won’t see our games – or anything quite like them – anywhere but WinADay.com.”

The Jack’s Show is one of the games that WinADay first launched with. Animated jesters frolic across the screen dealing cards and perform special antics for winning hands. The object of the game is to obtain the best poker hand possible. Players can wager from $1 to $25 per hand.

This month WinADay’s Game of the Month is the Slot-O-Matic. Everyone that plays it is automatically entered in a draw for $500 in prize money and a chance to win a Dell Studio 15 laptop in a year-end draw.

About WinADay.com Casino
A product of Slotland Entertainment S.A., WinADay.com Casino is a whimsical instant-play Flash casino offering unique free and real-money slot machines and card games. All of the one-of-a-kind games are tied to one progressive jackpot. Generous deposit bonuses, game-of-the-month bonuses, daily random draws bonuses and frequent six-figure progressive jackpot wins have made this casino popular around the world.