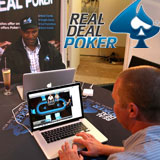 3 September 2010 (London, UK) – As always, preparation paid off and Evander ‘Real Deal’ Holyfield rose to the occasion to win a special tournament held live last night at Poker in the Park in London’s Leicester Square. Thousands of poker fans attending Europe’s largest poker festival watched the game between the five-time world heavy weight champion and the Midlands father who faced him on the felt.

“It’s like fighting,” Holyfield explained before the live tournament. “If you want to win you have to focus and prepare and that’s exactly what I did for this tournament just like I do for any challenge.”

“Leif was a challenging opponent but I managed to stay on top. I was really pleased with my win,“ continued Holyfield.

Preparation paid off for Holyfield who has been an ambassador for the unique online poker site since he discovered the difference real cards can make to online poker.

Leif G. (“GutShotRot”) won his way to the live Poker in the Park tournament by winning a series of qualifying tournaments at RealDealPoker.com – the only online poker room to deal real decks of cards. 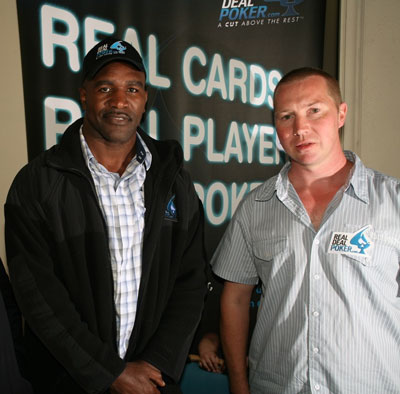 Evander Holyfield with Leif G. (“GutShotRot”) at Poker in the Park 2 September 2010. Click to enlarge

“It was a shame I lost but I was excited and pleased about the whole experience of coming to London with my family and meeting Evander and the RealDealPoker team,” said Holyfield’s opponent. “I noticed that Evander was really focused from the start. Playing one-on-one is a different kind of game for me and I’ll take a second shot at knocking him out during the freeroll game this Sunday.”

The prize pool of €2300 split was split 75/25 between the winner and runner up but GutShotRot returns to his local with full bragging rights.

Evander Holyfield will play in this Sunday’s €500 FreeRoll match at 8pmGMT. Visit www.realdealpoker.com for more info.