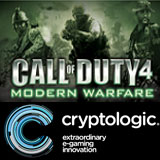 April 8, 2009 (Dublin, IRELAND) – CryptoLogic Limited, a world leader in Internet casino and branded gaming software, today announced the launch of a new downloadable game lineup that features Call of Duty 4: Modern Warfare, the blockbuster hit and top-selling video game in 2007. The new games, which also include the eagerly anticipated Millionaires Club III, multi-line video slots Samba Nights, Reel in the Cash, and Penguins in Paradise, a new card game in Double Deck Blackjack, and enhanced versions of Single Deck and Progressive Blackjack, are available exclusively to players at Intercasino.com, Casinojoy.com, and dtdcasinos.com.

CryptoLogic is also releasing 25 new instant play versions of its most popular downloadable slot games, including many of its leading branded slots and enhanced versions of European Blackjack and European Roulette. These games will be available at Intercasino.com on April 9, 2009.

“CryptoLogic’s branded casino games remain the bread and butter of our business – and the keys to our profitability and growth in 2009 and beyond,” said Brian Hadfield, CryptoLogic’s President and CEO. “We deliver a truly unique customer experience by bringing the world’s top video game titles to the world’s top Internet casinos.”

Call of Duty 4: Modern Warfare
Developed by Infinity Ward and published by Activision Publishing, Inc., Call of Duty 4: Modern Warfare is the best-selling first person action game of all time, having sold more than 12 million copies worldwide, based on data from NPD Charttrack and GfK. This explosive-action thriller arms gamers with an arsenal of advanced and powerful modern day firepower, and transports them to the most treacherous hotspots around the globe to take on a rogue enemy group threatening the world. The 25 pay-line slot game features rich graphics, animation and sound effects that replicate the acclaimed game experience.

CryptoLogic has also recreated the feel of console game play in the interactive bonus round, where players become SAS soldiers and can eliminate enemy combatants to win free games and cash prizes.

Reel in the Cash
Players cruise down the river to their favourite fishing hole in this fun, light-hearted river adventure. Landing on three or more fishermen triggers the Fishing Follies bonus feature, where players can fish for extra cash. Reel in the Cash features up to 20 lines and gives players a chance to pair one of the world’s favourite pastimes, fishing, with the chance to win life changing prizes.

Samba Nights
In CryptoLogic’s first-ever 50-line slot game, players will groove to the Brazilian beat as showgirls dance across the screen and the player has a chance to win free games and cash prizes. The game features stacked wilds that offer players the chance to win 100,000 times their line bet.

Penguins in Paradise
In this wave-riding adventure, players join Mr. Penguin as he rides the waves in a stunning virtual paradise. The 25-line slot game features a bonus round where players perform tricks in front of a panel of penguin judges. If the penguin wipes out while performing the trick, a consolation prize of two times the triggering bet is awarded. A free game feature is awarded when three or more scattered drink symbols appear, tripling all prizes.

Millionaires Club III
CryptoLogic’s record-breaking Millionaires Club is back in a third version that includes stimulating graphics and exciting bonus rounds. The Millionaires Club series has awarded some of the largest jackpots in Internet casino history, including a record win of US$8 million in 2007.

In the new third version, players can play up to 20 lines in a game that celebrates the finer things in life with rich animation, sound and attention to detail. The bonus feature is triggered when three or more logos appear. Players must find three jackpot tokens to trigger the jackpot round prizes and any stop of a prize amount pays out the winnings.

“With this launch, CryptoLogic demonstrates its ability to create innovation in the online slot category through unique spin mechanisms and functionality – while always staying true to the essence of every brand,” said Justin Thouin, CryptoLogic’s Vice President, Product Management and Business Development. “This demonstrates why CryptoLogic is the partner of choice to the world’s largest entertainment brands.”

Boasting more than 280 games, CryptoLogic has one of the most comprehensive casino suites on the Internet today with games featuring some of the world’s most famous action and entertainment characters. CryptoLogic has earned rave reviews from industry peers and players alike, and in 2008 earned Gambling Online Magazine’s Top Casino Software award for the fourth consecutive year. Based on the votes of players around the world, it is widely considered the industry’s top honour.

About CryptoLogic (www.cryptologic.com)
Focused on integrity and innovation, CryptoLogic Limited is a leading public developer and supplier of Internet gaming software. Its leadership in regulatory compliance makes it one of the very few companies with gaming software that is certified to strict standards similar to land-based gaming. WagerLogic Limited, a wholly-owned subsidiary of CryptoLogic, is responsible for the licensing of its gaming software and services to blue-chip customers that offer their games to non-U.S. based players around the world. For information on WagerLogic, please visit www.wagerlogic.com.