Legends Jack Binion and Doyle Brunson To Shuffle Up And Deal 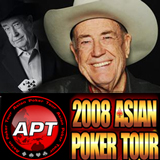 August 26, 2008 (MACAU, CHINA) – The excitement is building ahead of the second leg of the 2008 Asian Poker Tour in Macau. The event is being held at the bustling Galaxy StarWorld Hotel and Casino, running from August 27 to 31, 2008. The first card of the Main Event will be dealt at 2.30pm on Thursday 28th after a welcome reception and satellites tournaments tomorrow. The latest development sees a surprise visit by the legendary Jack Binion, host of the first World Series of Poker® at the Horseshoe in 1970. Binion and ‘Godfather of Poker’ Doyle Brunson are going to join tournament director Matt Savage to call ‘Shuffle Up and Deal” to open the prestigious event.

This afternoon Doyle Brunson took part in a book signing, and, after lines and lines of people queued around the block to meet the legend, he was in no doubt about the significance of his visit.

Brunson said: “I have been to so many tournaments and so many places in the world but I have to say I am so impressed with The Asian Poker Tour and Macau. This is the first time I have been here.”

“I thought Las Vegas was the gambling capital of the world but I was wrong, it feels like coming home.”

Member of the “November Nine” on the final table of the 2008 WSOP®, Michael ‘Chino’ Rheem, is playing the APT Macau and he joins a formidable line-up of champions and legends taking part. Chinese-born 10 time WSOP® bracelet winner and ‘Rounders’ film legend Johnny Chan will be in a field that also includes Todd Brunson, Liz Lieu, J.C Tran, Kenny Tran, John Juanda, Nam Le, Quinn Do, Steve Sung, Huck Seed, Mel Judah, Mansour Matloubi and APT Philippines champion David Saab. All have their eyes on glory and history at Asia’s richest tournament. The buy-in for the main event is USD $5300 ($5000+$300). The event organizers have also extended an open invitation to Olympic megastar and poker nut Michael Phelps. Experts believe that the Vietnamese contingent will be strong and are the ones to watch out for with JC Tran, Kenny Tran, Le, Do and Lieu leading the charge.

The APT Macau is making history by offering US$1.5 million, the largest guaranteed prize pool ever to be offered in Asia, with the first prize also guaranteed at $500,000. Many of the big names are also expected to take part in an exciting HK$1,000,000 high stakes cash game on Friday at the StarWorld, more details of which will be announced in the near future.

Chris Parker, CEO of the Asian Poker Tour said: “ We’re delighted that so many world class names want to be part of the Asian Poker Tour. To have Vegas legends Jack Binion and Doyle Brunson in Macau to kick-off off the tournament is truly significant. Both are pioneers and were around at the start in Vegas and it really says something that they want to mark what we think will herald the start of a poker explosion in Macau. With the presence of online qualifiers from around the world too, the Asian Poker Tour has a very bright future. We’re proud to make history by holding Asia’s biggest guaranteed tournament.”

David Saab of Australia won the top prize of US$280,000 at the first leg of the Asian Poker Tour in Manila on June 1st. He recently finished 46th in the WSOP® Main Event, winning US$135,100, and hopes to add a second APT championship to his poker accomplishments. The APT has also created a special leaderboard that rewards players who take part in every leg of the tour.

Further details about the APT Macau, including the schedule of events are available on the official website at www.asianpt.com (http://www.asianpt.com).

ABOUT ASIAN POKER TOUR (APT)
The Asian Poker Tour (APT) is Asia’s biggest and original poker tour. The Tour was recently acquired by AsianLogic (AIM:ALOG). As part of the new organisation of the APT, four events will be held across Asia in 2008. Next year, the Tour plans to increase this to a total of six events. Each tournament is set to attract live players as well as internet players who will qualify via online satellites. Each main event will offer a minimum guaranteed USD $1 million prize pool. The official web site of the APT is www.asianpt.com

ABOUT ASIANLOGIC (ALL)
AsianLogic is a leading online and land-based gaming company focusing on the Asia-Pacific markets. The Company is listed on the AIM market of the London Stock Exchange (AIM: ALOG). AsianLogic owns and operates eight online casino brands and two online poker rooms as well as land-based sportsbook operations through its MegaSportsWorld brand. It is a specialist in Asia-specific games such as Mahjong, Cho-Da-Di, Do-Di-Zhu and 13 Card Poker. The Company owns and operates the Asian Poker Tour. The Company also maintains a corporate advisory team specialising in the gaming sector which is an active investor in gaming-related businesses as well as providing consultancy and analytical services. AsianLogic enjoys strong commercial relationships with leading gaming providers including Playtech, ID Games and LVS. Founded as ESL in 2002, AsianLogic employs over 300 employees, the majority of whom are based in the Philippines.

World Series of Poker”® and “WSOP”® are registered trade marks of Harrah’s License Company LLC. No license, affiliation, sponsorship, or endorsement is claimed, or should be inferred from the use of these trademarks here. AsianLogic is not licensed by or otherwise affiliated with Harrah’s License Company LLC or the World Series of Poker®, in any way.

Prev: CAP Euro: Barcelona to Focus on Spanish Market Next: The Asian Poker Tour Writes an Open Letter to Michael Phelps… Is the ‘Human Dolphin’ Really a Fish?