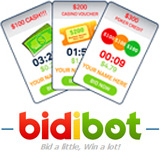 9 September 2010 (London, UK) – Online penny auction site, Bidibot.com is certainly the place to be if you’re an online poker player seeking real value for money at the moment.

The auction site, created by poker players for poker players has announced that its latest iPad auction has gone for the discount price of $5.10.

Bidibot CEO, John Tabatabai said, “Players should get used to this type of announcement because this is exactly the sort of value we’re offering at Bidibot.com. Not only are we offering players the sort of packages that they won’t find anywhere else, we’re giving them the chance to pay for them at around 90% discount value.”

The auction site is gearing up for another rush of activity this weekend as it announces another iPad giveaway, this Saturday, September 11, at 6pm.

Bidibot has also announced that packages from industry giants 888.com, VictoryPoker and Betfair are available as auction pieces on the site. The packages, which will range between $50 and $200 in value, will also include sports exchange prizes in addition to poker packages.

Bidibot.com allows poker players to bid on unique tournament and poker site credits worth up to tens of thousands of pounds for as little as a penny, with the last unique bid being credited with the auction piece. The site has also now accepts Visa and MasterCard as payment methods.

Note to Editors:
Bidibot.com was created by a group of professional poker players and sports enthusiasts with the desire to make the games and events they love to play more affordable for the masses. Bidibot is the first penny auction site that specifically caters for poker, casino and sports enthusiasts.
Their aim is to offer their customers an easy, unique and fun way to secure prizes for a fraction of their retail price. Through their bidding mechanism, one will have the opportunity to win anything from a $50 Voucher to a $10,000 Package including travel and accommodation, for as little as 1 cent. www.bidibot.com