Mark Maunsell takes 70th place in a field of 1,058 players 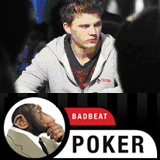 The other Badbeat.com player was Badbeat Managing Director John Conroy, who was eliminated after racing with TT against AK when down to just 15 big blinds, came in 81st and a prize of £1,375.

Mark first joined Badbeat.com as a Sponsored Player in April 2010 starting on a $300 Daily Limit and, with the support and tuition of his personal high-stakes mentor Manuel Palanca, worked his way through the levels to a $3,000 Daily Limit earning himself not only a profitable year with Badbeat.com but was awarded a PokerStars UKIPT ticket for his outstanding performance.

Mark’s mentor, Manuel, commented, “Mark played a fantastic game throughout his two days at the UKIPT Nottingham which sadly came to an end when his QQ ran into AK with the river bringing a King to eliminate Mark and put him in 70th place for a £1,585 prize. I’m still very proud of him for making it this far in such a big tournament.”

Mark Maunsell commented on his game, “This was my biggest live tournament and although it was a little nerve-wracking, my whole game was pretty solid. I just played the two cards in front of me and took it one step at a time.

Mark will be representing Badbeat.com again at the PokerStars UKIPT Manchester in March and you can keep track of him and all the Badbeat players who are entering by following them on Twitter (@BadbeatLimited), Facebook, the Badbeat Blog (blog.badbeat.com) or at www.badbeat.com.

Special Valentine’s Week Prizes will be given away to sponsored poker players from February 14-21st by hitting a Heart Flush or Straight Flush and Champagne to players who hold King and Queen of Hearts at Showdown. Visit www.badbeat.com for further details.

Founded in 2005, Badbeat.com is the original and leading online poker staking business. It is an organisation created to win at poker through the funding and comprehensive support of winning online players. Winning at poker is harder today than it was just a few years ago – and every Badbeat.com player has cutting-edge software tools, a structured development path with advanced learning aides coupled with the knowledge, expertise and support from a pool of world class poker mentors and support staff.