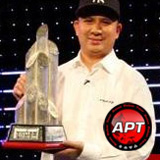 December 2, 2008 (London, UK) – Asian Poker Tour Ambassador JC Tran is the PartyPoker.com Premier League III champion after taking down the most formidable final table in the event’s history! Tran, widely regarded as one of the finest and consistent tournament professionals on the circuit scooped the $300,000 first prize in the elite tournament organized by Matchroom Sport that saw 12 of the world’s finest players battle it out for a $1.25 million prize pool! The buy-in was $75,000, with $350,000 added by PartyPoker.com.

“This is brilliant and I am so happy,” said Tran. “I have been feeling good all week and it is amazing to win this event. Until this week I had never played in Europe before – I really couldn’t ask for more! Perhaps I should move here! I would like to thank everybody who has made my trip to London such a wonderful experience.”

Tran, who also represents PKR at poker tournaments, has a close knit group of friends who he travels with on the poker circuit and they were all there to watch him triumph in a spectacular and masterful fashion at the deep-stacked final table. World class pros Nam Le and Quinn Do, two fellow Asian Poker Tour ambassadors, and David ‘Chino’ Rheem, were there for their friend cheering him on every step of the way.

Tran reached the final table as chip leader, as the favourite to win with www.partybets.com, and the overall league winner after fantastic displays that saw him pick up three first places and two second places in the heats. It wasn’t all plain sailing though as Tony G fought hard and also provided a spectacular domineering performance to finish runner-up.

At the start of the heads-up, Tony G had the advantage and held 1,150,000 to JC Tran’s 780,000. It looked like it was going to be Tony’s day until a key hand turned everything on its head. Pre-flop, a super confident Tony G raised to 75K with 8s 6s and Tran called with 10h 8c. After the flop came 10d Qh 6d Tony led out with 95K, which was called quickly by Tran. The turn brought a Qs and Tony bet 110K that prompted JC to raise it up to 260K. Tony folded and JC gained the chip lead and there was no going back. With the blinds at 20K/40K, Tran limped in with 9c 7d and Tony checked with Ks 8d. The flop came 5d 7h 6h and Tony G checked raised all-in only to be called by JC. Tony needed a king, four or nine to double-up and take a formidable chip lead. The turn came Js and a 2s on the river gave Tran victory. “I brought my best game but it just wasn’t good enough,” said Tony G, who played some spectacular poker on a final table that exhibited huge skill and class.

The action at the start of the final table certainly didn’t take long to get going and it was the fifth hand of the night that swung the balance of power. Unsurprisingly, Tom ‘Durrr’ Dwan was at the centre of the action, just like he had been all week. Tony G raised pre-flop with 10s 9h and was re-raised another 21,000 by Durrr with Qc 4c. Tony G called and the flop came down 4d Jc 10c. Durrr bet 43K and Tony moved all-in. Tom’s super-aggressive play had been a factor all week throughout the heats and Tony G had put a massive marker down. Dwan called with a flush draw and the turn was a 3h with a Kh on the river. Tony G doubled up to 434K and with chips the ‘mouth from down under’ started getting under the skin of his opponents as the verbals escalated. It looked like after a third place in season two that Tony G was the man to beat and that he might take the Premier League title he desperately seeks.

Even though Tom Dwan was short stacked, 2008 WSOP Main Event champion Peter Eastgate was the first to exit. Eastgate had impressed all week and went to the final table second in chips. Most observers predicted that it would be a battle between the Dane and JC Tran for the title. Eastgate ran into Tran’s pocket aces when his Ks 9s was no match on the final board of Js Kd 5d Jd Ac. The World Champion had raised pre-flop and when Tran flat called with his aces – it enticed Eastgate to move all-in on the flop and hang himself. Out in fifth was Roland de Wolfe, who failed to improve on his second place finish in season two after reaching the final table through the heads-up play-offs. Roland’s Kd Ks was crushed by Juha Helppi’s Ad Qc when an ace came on the flop. As all of this was unfolding, Tony G continued to talk, with commentator’s Jesse May and Phil Hellmuth convinced that he was winning the psychological battle. It even seemed at certain points that he might be getting under the skin of the super cool Tran.

Tom Dwan’s Premier League debut had received rave reviews all week but he finally bit the dust in fourth place. It was none other than Tony G who sent him on his way when “Durrr” found his 8h 6s up against Tony G’s Jc 8d. The flop came down 7s 8c 5h. Dwan failed to hit the open-ended straight draw and one of the most feared players of PartyPoker.com Premier League III was on his way. Tony G was in fine form singing “If you’re happy and you know it” and telling his rivals to get on their bikes. He was the chip leader and table captain and had more than double the stack of JC Tran. Finland’s Juha Helppi, winner of the inaugural PartyPoker.com Premier League was next to go in third place when his As 10d ran into Tony G’s Ad Qc and a queen came on the flop.

A PartyPoker.com spokesman said: “JC Tran’s performance was truly outstanding and there is no doubt at all that he is one cool cat and that he deserved to win. The standard of play all week from all the players involved was really something to remember.”

Eddie Hearn, Director of Matchroom Sport said: “The PartyPoker.com Premier League III lived up to all expectations and then some. Newcomers Eastgate, Dwan and Obrestad played some simply stunning poker that will be watched over and over again and JC Tran’s performance was pure genius from beginning to end. This series has completely raised the bar for televised poker and we are already planning the next installment!”

JC Tran, from Sacramento, California is of Vietnamese origin and recently signed a deal to become an ambassador for the Asian Poker Tour. He went to the final table as chip leader and league winner with 450,000. Second in chips was 2008 WSOP Main Event champion Peter Eastgate with 390,000. Season one winner Juha Helppi was third with 340,000. Sitting in joint fourth place at the start of the final table was Tom ‘Durrr’ Dwan and Tony G, both with 260,000. The short stack was Roland de Wolfe with 230,000. The deep stacked final table started with blinds at 2,000 – 4,000.

Tran, Eastgate, Helppi and Dwan all qualified automatically for the final table from their positions in the league table. Dwan and Tony G both finished with 26 points but ‘Durrr’ got the automatic spot based on his superior league record. Roland de Wolfe beat Annette Obrestad 2-0 in the first heads-up play-off to secure his seat at the grand finale, while Tony G beat Vicky Coren 2-0 to fix his place. Both De Wolfe and Tony G made the final table in season two with De Wolfe eventually finishing runner-up to champion Andy Black and Tony G finishing third.

PartyPoker.com Premier League III has not been so kind to Phil Hellmuth, who still holds the record of winning four heats in the Premier League but was unable to replicate the form that led him to dominate season one. He narrowly missed out on a place in the final eight but took part in a heads-up with JC Tran in the heats that people are already labeling a classic. Also relegated were defending champion Andy Black, Nenad Medic and David ‘Devilfish’ Ulliott. The final heats were particularly difficult for De Wolfe and Coren, who both had to play tight and hope other players busted themselves to secure enough points to finish in the final eight.

ABOUT THE ASIAN POKER TOUR (APT)
The Asian Poker Tour (APT) is Asia’s biggest and original poker tour. The Tour was acquired by AsianLogic (AIM:ALOG) in early 2008 and has held two successful events: one in the Philippines and the other in Macau. The APT plans to hold at least four major events in 2009 where each tournament is set to attract live players as well as Internet players who will qualify via online satellites. For more information, log on to the official web site at www.asianpt.com.

ABOUT ASIANLOGIC (ALOG)
AsianLogic (AIM: ALOG) is a leading online and land-based gaming company focused on the Asia-Pacific markets. Listed on the AIM market of the London Stock Exchange, it operates several online casino and online poker brands and is engaged in the development, operations and marketing of peer-to-peer gaming, Asian-themed games, and sports betting. The Company also owns the Asian Poker Tour, a premier live poker tournament.

The Company also maintains a corporate advisory team specialising in the gaming sector which is an active investor in gaming-related businesses as well as providing consultancy and analytical services. It enjoys strong commercial relationships with leading gaming providers including Playtech and LVS.