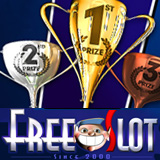 15 May 2012 (London, UK) – The world’s largest free online slots tournament site, FreeSlot.com, is now bigger and better than ever. There are more free slots games to play and more free tournaments awarding cash prizes. As of this week, FreeSlot.com has paid out a total of over $200,000 in real money winnings thanks to the ever growing selection of free slot games.

“Sometimes free games are rubbish, but these are really cool,” said one skeptical player who became an immediate Freeslot.com fan when she entered her first free slots tournament.

In daily tournaments, Freeslot.com players win $10, $25 and $50 cash prizes and the top ten scorers are permanently listed on the leaderboard. If they’re not satisfied with their score, players can play up to ten times to gain a better score and rank higher in the tournament. Many friendly rivalries have developed between regular players.

Today’s designated tournament game is Tropical Treat. Tomorrow it will be one of the other free slots games: Lucky Go Round, Heavenly Reels, Win A Fortune, Wheeler Dealer or Vegas Mania.

A video version of this story is available at: http://www.youtube.com/watch?v=6qHdl-V0dYs

About FreeSlot.com http://www.freeslot.com
Online since 2000 and recently re-launched with a whole new look and game selection, FreeSlot.com offers a wide selection of unique online slot machines that are absolutely free to play. Registered players can win cash prizes in free daily slots tournaments. As of today, the site has paid out total of $200,740 in winnings.