Over €7,000,000 in progressive jackpots to be won at Boss-powered online casinos 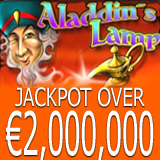 “Aladdin’s Lamp €5 has only been hit once before and that was last summer for just over €1.7 million,” said Mery Blomqvist, Head of Marketing & PR at Boss Media, one of the world’s leading independent software providers of complete online gaming & entertainment solutions. ”It’s hard to predict just how high this jackpot will soar before it’s won.”

Online casino’s powered by Boss Media offer a total jackpot pool of over €7 million and have paid out nearly €60 million to 960 winners over the last year. Boss has nearly 50 progressive jackpot games with jackpots ranging from €1300 to the €2 million Aladdin’s Lamp €5. Even the €1 version of Aladdin’s Lamp is at €860K while the Super Sevens Super is over €550K.

The jackpot on two other Boss Media games, Fortunes of Egypt Grand and Formula X Grand, has just been won for nearly €400K. Since it’s won, on average, about once a week for about €365K the next big win could be any day.

Casino games from Boss Media can be played at a number of casinos including Casinoclub.com and Paddypower.com.