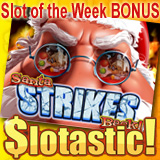 “I know, with so many bonuses it’s hard to keep track!” said Slotastic’s manager. “Basically, it’s $100 when you sign up, another $100 every month to be played on the Progressive of the Month, which is Aztec’s Millions this month, and another $100 every week to play on the Slot-of-the-Week, which this week is my personal favourite of our three Christmas games, Santa Strikes Back.”

From December 21st through 27th, players get double Comp Points when they play any of the three Christmas games. Slotastic! players earn Comp Points any time they play, usually 1 point for $10 in bets. Over the holidays, that has been doubled on Santa Strikes Back, Naughty or Nice, and Rudolph’s Revenge. Comp Points can be redeemed for cash.

All three Christmas games give chances to win free games and big jackpots. Santa Strikes Back is a sequel to Rudolph’s Revenge, a dark-humored, Christmas-themed, 50 pay line slot game featuring a vengeful Rudolph and a couple of shivering elves. It’s a progressive jackpot game — 5 evil Rudolph symbols on a payline wins the jackpot which is currently over $20,000. In the new Santa Strikes Back, Santa is back on his feet and has definitely had enough! It’s time to regain control of the North Pole. The ‘Santa Strikes Back!’ feature is triggered if Santa is victorious in 3 or more scatter-battles after a spin, whereas the ‘Rudolph’s Revenge’ feature is triggered when Rudolph is victorious. Both features award 7 free games. In Naughty or Nice, another 5-reel, 50 pay line slot machine, Santa has some sexy helpers. Each girl, whether naughty or nice, awards free games and instant prizes.

Slotastic! is a new US-friendly online casino featuring more than 300 casino games, including dozens of slot machines and video poker games and three of the biggest progressive jackpots available to American players. The Jackpot Pinatas jackpot is currently over $1.5 million; Shopping Spree/Midlife Crisis and Aztec’s Millions jackpots are both just over a million each.

About Slotastic!
Slotastic! is a full-featured, US-friendly online casino offering the best games and biggest progressive jackpots available to American players. Although the site focuses on slot machines and regularly presents Slot-of-the-Week bonus promotions, it has a complete selection of casino games in instant and download formats. Slotastic! offers more than 300 slot machines and table games from Real Time Gaming.