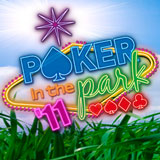 26 July 2011 (London, UK)- As well as catering to thousands of poker players with two giant Poker Domes spreading sit and go’s around the clock, the 5th annual Poker in the Park will also unveil a Mahjong Dome when it hits London on 2nd and 3rd September.

Organisers are hoping that hundreds of eager Mahjong players will flock to the new venue of Hanover Square, a stone’s throw from Oxford Circus, in order to set a new record for the biggest Mahjong tournament outside China.

Mahjong, “sparrow” in Chinese, is an ancient Chinese tile game with broad similarities to western games like rummy, in which a player must look to form sets of tiles to score points. Legend has it the game was invented by Confucius in about 500 BC, although historians believe it was based on a card game called Mǎdiào which can be traced back to the early Ming Dynasty.

Organiser Michael Caselli said, “The addition of Mahjong is not only a way to involve the large Chinese community from nearby China Town in our festival, but we also hope it will introduce a large number of poker players to what is one of the most widely played skill games in the world.”