WinADay.com has added 5 new games and awarded almost $600,000 in jackpots since it launched last year 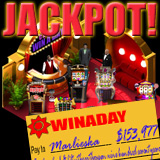 “I’ve been playing at Slotland for years and when they suggested I try their new 3D casino I did and I love it – the games are beautiful – I’ve never seen anything like them anywhere else!” said the excited winner. “I like multi-payline games so I’ve liked Vegas Mania since it first came out last spring. Lemme tell ya though, now I really LOVE it!”

Vegas Mania is a five-reel, 21 payline slot machine designed for serious, strategic slots players. They can get up to fifteen free spins and Wild symbols improve the chance of winning. Double Wilds increase chances of winning and double those winnings. Like all games at the innovative new casino, the new Vegas Mania is tied to the WinADay.com progressive jackpot.

The WinADay.com jackpot has been reset and is currently over $30,000. Meanwhile the jackpot at Slotland.com which was recently hit for just over $80,000 is already over that amount again.

There’s nothing to download or install at WinADay.com. It’s an instant-play casino so players can go straight to the three-dimensional games lobby where animated casino staff will help them decide which of the eight one-of-a-kind games to try first and be playing in minutes.